ViewPager is a Layout manager that allows the user to flip left and right through pages of data. It is most often used in conjunction with Fragment, which is a convenient way to supply and manage the lifecycle of each page.

One important thing to note about ViewPager usage is that there are two different versions of both FragmentPagerAdapter and FragmentStatePagerAdapter.

Make sure the following dependency is added to your app's build.gradle file under dependencies:

Then add the ViewPager to your activity layout:

Finally setup the ViewPager in your Activity:

A ViewPager allows to show multiple fragments in an activity that can be navigated by either fliping left or right. A ViewPager needs to be feed of either Views or Fragments by using a PagerAdapter.

There are however two more specific implementations that you will find most useful in case of using Fragments which are FragmentPagerAdapter and FragmentStatePagerAdapter. When a Fragment needs to be instantiated for the first time, getItem(position) will be called for each position that needs instantiating. The getCount() method will return the total number of pages so the ViewPager knows how many Fragments need to be shown.

Be aware that both implementations assume your fragments will keep their positions, so if you keep a list of the fragments instead of having a static number of them as you can see in the getItem() method, you will need to create a subclass of PagerAdapter and override at least instantiateItem(),destroyItem() and getItemPosition()methods.

Just add a ViewPager in your layout as described in the basic example:

Then define the adapter that will determine how many pages exist and which fragment to display for each page of the adapter.

If you are using android.app.Fragment you have to add this dependency:

If you are using android.support.v4.app.Fragment you have to add this dependency:

If you need to listen for changes to the page selected you can implement the ViewPager.OnPageChangeListener listener on the ViewPager:

ViewPager with a dots indicator 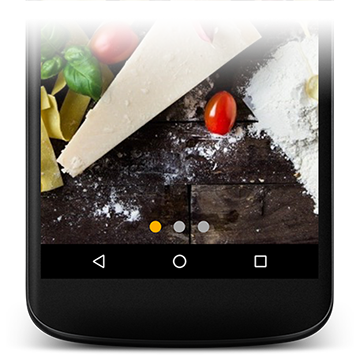 All we need are: ViewPager, TabLayout and 2 drawables for selected and default dots.

Firstly, we have to add TabLayout to our screen layout, and connect it with ViewPager. We can do this in two ways:

In this case, we can put TabLayout anywhere, but we have to connect TabLayout with ViewPager programmatically

Once we created our layout, we have to prepare our dots. So we create three files: selected_dot.xml, default_dot.xml and tab_selector.xml.

Now we need to add only 3 lines of code to TabLayout in our xml layout and you're done.

The latest versions of the support v7 library now include the PreferenceFragmentCompat class, which will work with a ViewPager and the v4 version of FragmentPagerAdapter.

You can now use this Fragment in a android.support.v4.app.FragmentPagerAdapter subclass:

A TabLayout can be used for easier navigation.
You can set the tabs for each fragment in your adapter by using TabLayout.newTab() method but there is another more convenient and easier method for this task which is TabLayout.setupWithViewPager().

This method will sync by creating and removing tabs according to the contents of the adapter associated with your ViewPager each time you call it.
Also, it will set a callback so each time the user flips the page, the corresponding tab will be selected.

Then implement the FragmentPagerAdapter and apply it to the ViewPager: