Unit testing in Android with JUnit

The test class, you can create several test classes and place them inside the test package.

The test method, several test methods can be created inside a test class.

The Test annotation tells JUnit that the public void method to which it is attached can be run as a test case.

There are several other useful annotations like @Before, @After etc. This page would be a good place to start.

These methods are member of the Assert class. Some other useful methods are assertFalse(), assertNotNull(), assertTrue etc. Here's an elaborate Explanation.

@Test: The Test annotation tells JUnit that the public void method to which it is attached can be run as a test case. To run the method, JUnit first constructs a fresh instance of the class then invokes the annotated method.

@Before: When writing tests, it is common to find that several tests need similar objects created before they can run. Annotating a public void method with @Before causes that method to be run before the Test method.

@After: If you allocate external resources in a Before method you need to release them after the test runs. Annotating a public void method with @After causes that method to be run after the Test method. All @After methods are guaranteed to run even if a Before or Test method throws an exception

JUnit can also be used to test if a method throws a specific exception for a given input.

In this example we will test if the following method really throws an exception if the Boolean format (input) is not recognized/unknown:

By adding the expected parameter to the @Test annotation, one can define which exception is expected to be thrown. The unit test will fail if this exception does not occur, and succeed if the exception is indeed thrown:

This works well, however, it does limit you to just a single test case within the method. Sometimes you might want to test multiple cases within a single method. A technique often used to overcome this limitation is using try-catch blocks and the Assert.fail() method:

Note: Some people consider it to be bad practice to test more than a single case inside a unit test.

Getting started with JUnit

Add the following line to your module build.gradle file within the dependencies Closure:

JUnit test classes are located in a special source-set named test. If this source-set does not exist you need to create a new folder yourself. The folder structure of a default Android Studio (Gradle based) project looks like this:

If setup correctly your project structure (in the Android view in Android Studio) should look like this: 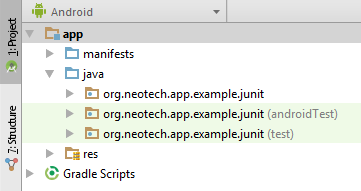 Note: You don't necessarily need to have the androidTest source-set, this source-set is often found in projects created by Android Studio and is included here for reference.

A lot of the value from local JVM unit tests comes from the way you design your application. You have to design it in such a way where you can decouple your business logic from your Android Components. Here is an example of such a way using the Model-View-Presenter pattern. Lets practice this out by implementing a basic sign up screen that only takes a username and password. Our Android app is responsible for validating that the username the user supplies is not blank and that the password is at least eight characters long and contains at least one digit. If the username/password is valid we perform our sign up api call, otherwise we display an error message.

Example where business logic is highly coupled with Android Component.

Example where business logic is decoupled from Android Component.

Here we define in a single class, LoginContract, that will house the various interactions between our various classes.

Our LoginActivity is for the most part the same except that we have removed the responsibility of having to know how to validate a user's sign up form (our business logic). The LoginActivity will now rely on our new LoginPresenter to perform validation.

Now your business logic will reside in your new LoginPresenter class.

And now we can create local JVM unit tests against your new LoginPresenter class.

It should be noted that there are various other implications from our change in architecture such as we are close to adhering to each class having a single responsibility, additional classes, etc. These are just side effects of the way I choose to go about performing this decoupling via the MVP style. MVP is just one way to go about this but there are other alternatives that you may want to look at such as MVVM. You just have to pick the best system that works for you.

JUnit defines quite some assertEquals methods at least one for each primitive type and one for Objects is available. These methods are by default not directly available to call and should be called like this: Assert.assertEquals. But because these methods are used so often people almost always use a static import so that the method can be directly used as if it is part of the class itself.

To add a static import for the assertEquals method use the following import statement:

You can also static import all assert methods including the assertArrayEquals, assertNotNull and assertFalse etc. using the following static import: