An Intent is a small message passed around the Android system. This message may hold information about our intention to perform a task.

It is basically a passive data structure holding an abstract description of an action to be performed.

When calling a implicit intent it's always helpful to check if it's possible by the system to handle it.

This can be done by checking using PackageManager.queryIntentActivities(Intent intent, int flags)

When the activity's launch mode is singleTask or singleTop, the onActivityResult will be called as soon as the activity is started with a data null. To prevent this, use Intent.setFlags(0) to reset the default flags.

Broadcasting Messages to Other Components

Intents can be used to broadcast messages to other components of your application (such as a running background service) or to the entire Android system.

To send a broadcast within your application, use the LocalBroadcastManager class:

To send a broadcast to components outside of your application, use the sendBroadcast() method on a Context object.

Information about receiving broadcasts can be found here: Broadcast Receiver

Sometimes you may want to start a new activity while removing previous activities from the back stack, so the back button doesn't take you back to them. One example of this might be starting an app on the Login activity, taking you through to the Main activity of your application, but on logging out you want to be directed back to Login without a chance to go back. In a case like that you can set the FLAG_ACTIVITY_CLEAR_TOP flag for the intent, meaning if the activity being launched is already running in the current task (LoginActivity), then instead of launching a new instance of that activity, all of the other activities on top of it will be closed and this Intent will be delivered to the (now on top) old activity as a new Intent.

It's also possible to use the flags FLAG_ACTIVITY_NEW_TASK along with FLAG_ACTIVITY_CLEAR_TASK if you want to clear all Activities on the back stack:

Using a CustomTabsIntent, it is now possible to configure Chrome custom tabs in order to customize key UI components in the browser that is opened from your app.

This is a good alternative to using a WebView for some cases. It allows loading of a web page with an Intent, with the added ability to inject some degree of the look and feel of your app into the browser.

To use custom tabs, you need to add this dependency to your build.gradle

Getting a result from Activity to Fragment

In the following example ActivityOne contains FragmentOne, which will start ActivityTwo and expect a result from it.

Getting a result from another Activity

By using startActivityForResult(Intent intent, int requestCode) you can start another Activity and then receive a result from that Activity in the onActivityResult(int requestCode, int resultCode, Intent data) method. The result will be returned as an Intent. An intent can contain data via a Bundle

In this example MainActivity will start a DetailActivity and then expect a result from it. Each request type should have its own int request code, so that in the overridden onActivityResult(int requestCode, int resultCode, Intent data) method in MainActivity , it can be determined which request to process by comparing values of requestCode and REQUEST_CODE_EXAMPLE (though in this example, there is only one).

A few things you need to be aware of:

This example shows, how to start intent from browser:

This intent will start app with package com.sample.test or will open google play with this package.

Also this intent can be started with javascript:

In activity this host and path can be obtained from intent data:

Open a URL in a browser

Opening with the default browser

This example shows how you can open a URL programmatically in the built-in web browser rather than within your application. This allows your app to open up a webpage without the need to include the INTERNET permission in your manifest file.

Prompting the user to select a browser

Note that this example uses the Intent.createChooser() method:

In some cases, the URL may start with "www". If that is the case you will get this exception:

The URL must always start with "http://" or "https://". Your code should therefore check for it, as shown in the following code snippet:

Check if there are no apps on the device that can receive the implicit intent. Otherwise, your app will crash when it calls startActivity(). To first verify that an app exists to receive the intent, call resolveActivity() on your Intent object. If the result is non-null, there is at least one app that can handle the intent and it's safe to call startActivity(). If the result is null, you should not use the intent and, if possible, you should disable the feature that invokes the intent.

You can pass latitude, longitude from your app to Google map using Intent

It is also possible to pass your custom object to other activities using the Bundle class.

There are two ways:

Parcelable processing is much faster than serializable. One of the reasons for this is that we are being explicit about the serialization process instead of using reflection to infer it. It also stands to reason that the code has been heavily optimized for this purpose.

Receiving the object in destination activity.

You can pass Arraylist of Parceble object as below

Note: There are Android Studio plugins such as this one available to generate Parcelable code

Receiving the object in destination activity.

This example illustrates sending a String with value as "Some data!" from OriginActivity to DestinationActivity.

NOTE: This is the most straightforward way of sending data between two activities. See the example on using the starter pattern for a more robust implementation.

It is also possible to pass other primitive data types as well as arrays, Bundle and Parcelable data. Passing Serializable is also possible, but should be avoided as it is more than three times slower than Parcelable.

Serializable is a standard Java interface. You simply mark a class as Serializable by implementing the Serializable interface and Java will automatically serialize it during required situations.

Parcelable is an Android specific interface which can be implemented on custom data types (i.e. your own objects / POJO objects ), it allows your object to be flattened and reconstruct itself without the destination needing to do anything. There is a documentation example of making an object parcelable.

Once you have a parcelable object you can send it like a primitive type, with an intent object:

Or in a bundle / as an argument for a fragment:

and then also read it from the intent at the destination using getParcelableExtra:

Or when reading in a fragment from a bundle:

Once you have a Serializable object you can put it in an intent object:

and then also read it from the intent object at the destination as shown below:

Note : Keep in mind your custom Class must implement the Serializable interface.

This will pre-fill an email in a mail app of the user's choice.

A word of caution: not every device has a provider for ACTION_SENDTO, and calling startActivity() without checking with resolveActivity() first may throw an ActivityNotFoundException.

It basically loops through the paths, adds them to Uri, and starts the Activity which can accept Files of this type.

Showing a File Chooser and Reading the Result

Another way to create the Intent to open DestinationActivity is to use the default constructor for the Intent, and use the setClass() method to tell it which Activity to open:

This example shows how to open a default dialer (an app that makes regular calls) with a provided telephone number already in place:

Result from running the code above: 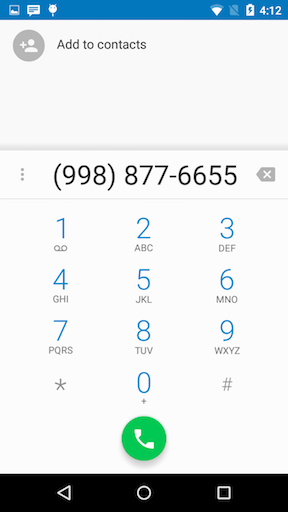 A Service is a component which runs in the background (on the UI thread) without direct interaction with the user. An unbound Service is just started, and is not bound to the lifecycle of any Activity.

To start a Service you can do as shown in the example below:

You can use any extras from the intent by using an onStartCommand() override:

This pattern is a more strict approach to starting an Activity. Its purpose is to improve code readability, while at the same time decrease code complexity, maintenance costs, and coupling of your components.

The following example implements the starter pattern, which is usually implemented as a static method on the Activity itself. This static method accepts all required parameters, constructs a valid Intent from that data, and then starts the Activity.

An Intent is an object that provides runtime binding between separate components, such as two activities. The Intent represents an app’s "intent to do something." You can use intents for a wide variety of tasks, but here, your intent starts another activity.

This pattern also allows you to force additional data to be passed with the intent.

The ExampleActivity can then be started like this, where context is an activity context: